Mirror on the Wall

Mirror on the Wall

By CRISTIÁN A. SIERRA

The beauty of any interest in mural making is that it is accessible. It is a means of expression in public view," says longtime Tucson muralist and Pima Community College art professor David Tineo. "Murals promote heritage." At the August 25 Fiesta de San Agustín at Armory Park, Tineo will discuss his ideas and art, and field questions from the audience along with other speakers who will take the stage on various topics between 1 and 4 p.m.
Tineo says he wasn't influenced by the Mexican muralists' politics "but by the impact of art for the people. Art should be accessible to anyone. The reason I lean towards the Mexican muralists is their context of taking everyday common imagery as far as la raza indígena [the indigenous people] and communicating that as an art form to the world."

Since the late '70s Tineo has been putting his paint brush where his heart is, beautifying everything from the walls of commercial spaces such as El Charro Café to the north wall of the Tucson Museum of Art, as well as painting on canvases and working with children at Holcolm Middle School.

"You take an art form which is mural making and you get [kids] to express themselves and redirect those energies to get them talking about issues and things about themselves, what's important for them," says Tineo. "Public art or mural art is an act of empowerment. It acts as a catalyst for learning and expression and participation."

Tineo describes his work as "del corazón" [from the heart] and "espejo del publico" [a mirror of society]. Though he does do easel work, Tineo prefers the collaborative process and exposure of the mural, although he admits mural work isn't lucrative and when a building is sold, persuading the new owner to keep the mural is sometimes a challenge.

"Sometimes we face a dilemma of durability as soon as that building is bought by a new owner," he says. "Hopefully we convince the new owners to keep that mural. The mural is a viable part of that community. It is the very lifeblood of that community. But the key here is to involve the community. It's not individual expression. It's a group collaboration of ideas, hopes, dreams and insights. [The muralists] are just the catalysts. We direct and coordinate as artists and pull together those concepts into some kind of format that communicates the hopes of the people."

But murals haven't gotten the respect they deserve as an art form, says Tineo. "In the '70s and '80s a lot of what we did wasn't considered art. It was considered more of a folk style and not accepted as a valid art form ... [but] the only voice we had [during the Chicano movement of the '60s and '70s] was the art. We didn't have the political power we have now. That was how we got our message across: through the music, the art and the Teatro Campesino [a Chicano theatrical troop founded on the picketing lines of the Delano grape strike in 1965].

"I've always been fighting for [murals] because the first form of art was a mural. Cave paintings in Altamira, Spain [show] it was the artist that empowered the clan to succeed in the hunt. It wasn't after the fact. It was before. They envisioned success, they portrayed a successful hunt," says Tineo, who sees mural art in this way empowering an entire community. "Murals are just as important as easels, even more so because it is the marriage of artist and community: The murals being the children."

But fighting for one's individual means of expression isn't new to Tineo, who grew up in Barrio Anita in the 1950s and early '60s and was put into special education along with others who refused to speak English. "There was no acceptance or acknowledgement of bilingual education," he says. "We weren't allowed to speak Spanish. ... You were punished for speaking Spanish." Now he is in those same schools, working with children to express themselves through mural making.

As for future projects, Tineo still works closely with Raíces Taller 222 Art Gallery and Workshop, a local Chicano arts organization that will be showing some of Tineo's canvases in an upcoming Politics, Religion and Arts show. Tineo will also do a lecture series with the Tucson Museum of Art for Día de los Muertos in late October and early November to promote Mexican heritage and culture
Posted by David Tineo at 10:22 AM No comments:

Top Stories
Posted by David Tineo at 11:07 AM No comments:

Tucson muralist David Tineo was given the Governor's Arts Award in the artist category Tuesday at a ceremony in Scottsdale.
Tineo, a native of Douglas who grew up in Tucson's Barrio Anita and lived much of his life at his current home in Menlo Park, has filled his hometown with colorful murals celebrating his Hispanic heritage.
He continues to paint despite the loss of most of his central vision to macular degeneration.
Tineo gave a brief speech in Spanish and English in accepting the award during an event at the Camelback Inn.
He said his art is "all about the kids. It's about giving and learning and keeping an open mind."
One of the leaders of the Chicano mural movement in Arizona, Tineo first made his mark in the '80s at El Rio Neighborhood Center. Tineo, along with muralist Tomás Bandaries and an army of neighborhood children, filled many of the complex's exterior surfaces. As the center expanded, Tineo returned to fill many of the interior spaces as well.
His most noted mural, done in tandem with Antonio Pazos, hangs on the north exterior wall of the Tucson Museum of Art.
In nominating him for the Governor's Arts Award, John Salgado, president of Raices Taller 222 Art Gallery, singled out Tineo's work on mural projects with youth, saying he was part of an Art for the People movement that recognized the value of art training and artistic expression for low-income and "at-crisis" children.
In addition to the many community murals created in those after-school and summer programs, Tineo supervised and guided creation of wall murals at more than 25 area schools.
Tineo earned a bachelor of fine arts degree from the University of Arizona, and two of his murals still hang on campus. He taught a mural class at Pima Community College's Desert Vista campus where several of his class' murals are displayed.
Awards were also given in four other categories Tuesday.
Shelley Cohn, former executive director of the Arizona Commission on the Arts, was given the arts advocate award.
Gerry Fathauer was given an award for individual support of the arts for her work in developing the Mesa Arts Center.
DMB Associates Inc., a Phoenix-area real-estate and investment firm, was selected for its corporate support of the arts.
The Chandler Center for the Arts was recognized for its community support of the arts.
Bonnie Dent, high-school art teacher from Williams, won for support of the arts in education.
The Governor's Arts Awards have been sponsored for 25 years by Arizona Citizens for the Arts.
Previous winners of the artist award include flutist and composer R. Carlos Nakai, painter Fritz Scholder, artist and architect Paolo Soleri, Tucson glass artist Tom Philabaum and theater director David Ira Goldstein.
● Contact reporter Tom Beal at 573-4158 or tbeal@azstarnet.co
Posted by David Tineo at 7:30 PM 1 comment:

For more information on events and shows visit: 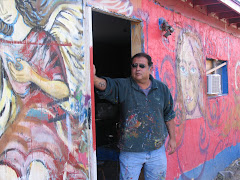 The artist in his Barrio Hollywood studio in Tucson, Arizona

As the Lights Fade Out